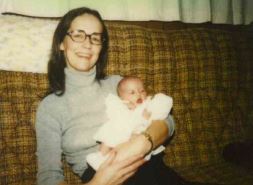 A lifelong native of Henderson County, Earline was born to the late Albert and Lillie Jones Gosnell; she was also predeceased by a son Walter James “Buddy” Denton, Jr., brothers Albert and Calvin Gosnell and sisters Edna Gosnell and Connie Watts.

Earline enjoyed caring for others; she worked at Berkley Mills and Henderson’s Rest Home until her retirement. She was a faithful Baptist. In her spare time, she loved being outside, tending to her yard, and going for walks. Earline also loved reading and solving puzzles.

Left to cherish her memory are her daughter Pat Culver and her boyfriend Jeff of Mills River, brother Edward Gosnell and his wife Pat of Hendersonville, grandchildren Tony, Donnie and Jimmy Capps of Zirconia, Amanda Weaver and Scott Denton of Knoxville, Tennessee, and great-grandchildren Jacob and Alyssa Capps, Case and Paisley Weaver and Adalyn and Alivia Denton. She also leaves behind several nieces and nephews.

A funeral service will be held at 1pm, Thursday, September 15, 2022, at the chapel of Forest Lawn of Hendersonville, with Rev. Matt Metzger officiating; a visitation will be held one hour prior.

Please accept our condolence in the loss of your loved one. We were first cousins to your mother. Our mother and her father were brother and sister. Our mother was Docie (Gosnell) Rhodes who passed away several years ago.

Pat,
I am sorry to hear about your mama. I was happy to get to visit with her along with Amanda and her children prior to Covid locking everyone down. It is comforting knowing she is with Walter and Buddy is in our Heavenly home. I remember she was always playing solitaire or working all kinds of word or number puzzles. Amanda also enjoys all kinds of puzzles and keeping her brain sharp like her mamaw.
God bless you and your boys and their family’s. I met several last time I was up there and it was good to see them all grown up and with families of their own.
Please stay in touch with your Tennessee family.