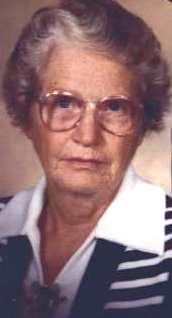 Ethel Duncan Case, 93, of the Tracy Grove community, passed away peacefully Wednesday, March 7, 2012, at Cardinal Care Center after being afflicted several years with Alzheimerís disease. She was born December 29, 1918 to the late Major Palmetto Duncan and Mary Matilda Corn Duncan. She was married for 57 years to Louis O. Case who died in 1991. She was also preceded in death by seven brothers and their wives, Donald (Lillie), Edgar (Lucile), Raymond (Louise), Paul (Ira), Ulas (Nellie), Silas (Agnes), and Clarence (Mattie), who was killed in WWII; two sisters and their husbands, Katie Corn (Volley) and Carrie Pace (Ernest); and a son-in-law, Jack Talley.

Mrs. Case was first employed as a mail truck driver in Cherry Point, NC. She worked at Greyís Hosiery Mill Co. and Rogers Hosiery Mill Co. in Hendersonville until 1960. She sold at the Henderson County Curb Market for many years, where she was well known for her homemade jams, jellies, pickles, flowers, and crafts. She also arranged and donated flowers for many years at Bethel Wesleyan Church in Flat Rock, where she was a member. She was a loving and caring person who always saw to the needs of others as long as she was able.

A funeral service will be held at 2:00 PM on Saturday, March 10, 2012 in the Chapel at Forest Lawn Funeral Home with Rev. Mark G. Staton officiating. Burial will follow at Forest Lawn Memorial Park. The family will receive friends one hour prior to the service at the funeral home.

Julia, So sorry to hear about your mother! I just found out that she had passed away. Hard to lose a parent but we know they are better off! Our prayers and thoughts are with you!

Ethel was always a favorite with our family. She was a wonderful person. Have thought of her often these past few years.God bless both of you and your families.

Doncy and the Case family from Mo.

Thinking of you at this sad time. What a long and fulfilling life your mother lived. We all know that she is in a much happier place. Sorry I was unable to be with you as you said your good byes. Just know that I have had you in my thoughts and prayers. Love, Sue

It was my honor to have been a Hospice volunteer for the past year and a half and to have been able to have visited your mother weekly. I will miss her and her bright smile. My thoughts and prayers are with you

my condolences to the family and God comfort you always .