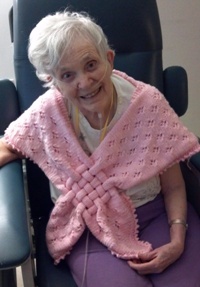 Florence ìFlossieî Calhoun Stewart, 82, of Hendersonville passed away Monday, January 23, 2012 at Elizabeth House. A native of Klamath Falls, OR, she lived in Henderson County over twenty years. She was the wife of the late William C. Stewart who died in 2010. She was a member of Immaculate Conception Catholic Church, and the Order of the Secular Franciscans. She was a great wife, mother, and grandmother, who always had a smile on her face.

Survivors include a son, Jamie Stewart and his wife Debbie of Alabaster, AL; a daughter, Diane Stewart and her partner Kim Joens of Monroe, GA; two grandchildren, Tommy Stewart and his wife Courtney of Overland Park, KS, Erin OíMally Stewart Dubinsky and her husband Adam of Lawrence, KS; a great grandson, Jake Stewart; a step-granddaughter, Todi White of Decatur, GA; a step-great granddaughter, Vidalia White of Decatur, GA; two sisters, Frances and Ruth; and a number of nieces and nephews.

A funeral mass will be celebrated at 3:00 pm Wednesday in Our Lady of the Angels Chapel of Immaculate Conception Catholic Church. Father John Salvas will officiate. Entombment will follow at Forest Lawn Memorial Park Mausoleum.

I’m a square dancer and I’ve known your parents since my husband and I moved here in 1989. My husband passed away in ’97 and when Flossie became unable to dance I danced with Bill at a number of “A” dances. They were always very upbeat and felt that Flossie would return to the activity. When I visited Flossie at Pine Park I brought her a “prayer shawl.” I was not surprised to see that she had already received two. So many people wanted her to have God’s blessings. I was at the mass with Ingrid Perry and Helen Woodman (more former square dancers) on Wednesday, but I did not go to the entombment so I did not get the opportunity to express my heartfelt sympathy to you both.

“To laugh often and much- to win the respect of intelligent people and affection of children- to earn the appreciation of honest critics and endure the betrayal of false friends- to appreciate beauty- to find the best in others- to leave the world a bit better- whether by a healthy child- a garden patch- or a redeemed social condition- to know even one life has breathed easier because you have lived. This is to have succeeded.”Ö Ralph Waldo Emerson

I know both your parents succeeded.

I am so sorry for your loss I really enjoyed taking care of Mrs Stewart she always made my day a little brighter.

My deepest sympathies on the loss of a great woman. I hope you find comfort in the warm memories you have and the promise that she is free from all the limitations she has suffered in the past several years. She and your dad are together once again.

Flossie will be greatly missed. Her smile would light up a dark room. My thoughts and prayers are with her family. May God help you all through this difficult time.

Flossie was a person to learn from she had unlimited patience never a unkind word. Her smiles would light up a whole room. She will be deeply missed. Love Andrea

What a dear sweet lady. I’m sure everyone will miss her sweet smile. Sandi Hill