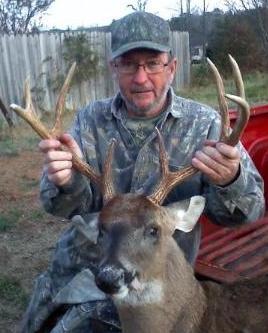 George McCoy Lanning, Jr., 59, of Columbus, NC, died unexpectedly Saturday, February 2, 2013, at his home and went into the loving arms of his wife. He was a lifelong resident of NC. He was preceded in death by his wife, Connie Fowler Lanning who died December 1, 2009 and his brothers, James and Jesse Lanning; He was the son of the late George McCoy Lanning, Sr., and Daisy Raines Lanning of Woodfin;

He was of the Christian faith, and was an avid deer hunter, fisherman, and had a great love for children.

In addition to his mother, he is survived by his son, Shannon Lanning; two brothers, David and Ricky Lanning; one sister, Anne Bradley; and numerous nieces, nephews, and cousins.

Two down one to go.

Shannon, I’m very sorry to hear about your loss, if there’s anything I can do, just give me a holler.

So sorry for your lose.Please let us know if we can help in any way.

Shannon, where so sorry for the loss of your dad. Where praying for you and always remember when life get rough your mom and dad are looking down on you. Don’t worry one minute about what Candice Basham is saying. If you need anything let us know.

We are truly sorry for your loss. We understand some of what you are going through but believe us it will get easier but they will never be forgotten. Remember the good times and cherish the time that you did have together. If you need anything let us know. Your in our thoughts and prayers.

Dear Family, Your in our thoughts and prayers. May God Bless you now, and during times to come.

Jr will be missed greatly. Shannon, I am so sorry for your loss and hate that you are going through this! You are in my thoughts and prayers!

so sorrow to hear about jr he was a dear friend we went fiishin and huntins we will sure miss him,we are praying for the familyjames,buddy and martha

Dear Shannon, We are very sorry. I know those words are the normal at this time, but,they are directly from our hearts.Always, remember, we love you and will be there for you.You are in our thoughts and prayers.Remember this, From ‘Footprints in the Sand’ “When you saw only one set of footprints, that is when I carried you” God will carry you thru this too. He will never put more on you than you can bear.We love you, Ronnie and Mary