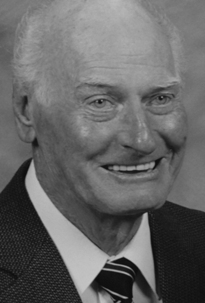 Gordon E. Reynolds Jr., 90, passed away in his home, the morning of August 23rd. He and his wife Katie, who passed shortly before him, had been vital members of the Hendersonville community since moving here from New York City in 1989. Mr. Reynolds is perhaps best remembered for his service to the community, exemplified in his hard-won lobbying to build the YMCA’s soft-surface tennis courts. He diligently oversaw every aspect of the building of the courts, which, today, bear his name. Friends also remember his strong athletic handshake built up over years of competitive tennis all over the countryó a handshake which was still astonishing guests at a recent dinner at the First Presbyterian Church of Hendersonville.

Rev. William Campbell, pastor of the Church will conduct a public memorial service at the Forest Lawn Memorial Park on Monday, October 3rd at 11 a.m. Guests are welcome.

Gordon was born the third child of Gordon Everett Reynolds and Octavia Allison, both of Warren County, Tennessee, on December 27, 1920, in Albany, Georgia. He was to outlive his three siblings. The family of Mr. Reynolds comes of Colonial American ancestry, including three soldiers of the Revolution. It can also be traced back to the Knights of the Magna Carta. Gordon was educated in Albany public schools including Albany High School until 1936 when he was recruited by the Baylor School in Chattanooga, Tennessee. He was captain of the basketball and tennis teams, and he and his partner were runners-up in the Mid-South Doubles Tennis Tournament. An excellent student, Gordon graduated in May, 1938, and went on to study at Sewanee, where he was the Tennessee Intercollegiate Tennis Champion.

Like his brother Jimmy before him, Gordon was called out of The University of the South by his father to help with the rapidly growing Reynolds Brother’s Lumber Co. He was charged with supervising the 34,000 acre Wild-Life Management Area along the Chickasawhatchee tributaries. He maintained a strict shotgun-free ordinance, firebreak networks, propagative logging, cattle raising within fence, and stocked seed Michigan white-tail deer, creating a densely and diversely inhabited wildlife breeding refuge.

During this tenure as Forman, he was admitted to the Phoebe Putney Hospital in Albany for an appendectomy, and fell in love with his beautiful, brainy young nurse, Kate Arleva Hagler of Skipperville, Alabama. After a lengthy courtship, the two were married in a lavish ceremony on the 14th of September, 1944, at the First Baptist Church in Albany, Georgia. Following a mountain honeymoon, Gordon and his brother Jim left the family business to start their own company, building the “Valliant Fleet” of ships under the banner of Inter-American Transport Lines, Inc. They began by converting a steamer, “The Vermont,” for use as a cargo ship, inaugurating a freight transport system on Lake Champlain servicing Canada and New York. On Monday, July 17th, 1950, “The Vermont” became, according to the Maryland “Daily Banner,” “the longestóif not the largest-tonnage vessel ever to put in Cambridge Harbor.”

Following the fleet, Gordon and Katie moved to Brooklyn Heights to oversee the business in the Ports of New York and New Jersey, where they enjoyed a warm and vibrant social life. In 1954, Gordon and Katie were blessed with a baby boy, Gordon Everett Reynolds III.

In New York, Gordon was once again able to pursue his passion for tennis. He and his wife became active members at the Height’s Casino. In addition to winning numerous tennis tournaments in both doubles and men’s singles, Gordon became known around town as the “go to” guy for pros warming up for matches and qualifying rounds. Thus began friendships with Rod Laver, Pancho Gonzalas, Al Doyle, Vitas Gerulaitas and Bobby Riggs. Celebrities, like Johnny Carson and Allen Funt frequently played tennis with him at The Vanderbilt Athletic Club or at The River Club. Brothers George and Johnathan Bush, Hank Greenburg and New York Mayor John Lindsey also played regularly with Gordon.

When Gordon and Katie Reynolds retired to Hendersonville more than 20 years ago, Gordon became even more active in tennis, both locally and nationally. He and Katie played golf daily and Katie was an enthusiastic companion to her husband as he toured the Southern Seniors Tennis Curcuit. In 2001 Gordon was ranked No. 1 in the Southern Section of the USTA’s men’s 80s singles division.

It was shortly after this that he curtailed touring, choosing to stay home to care for his wife, whose health was declining. When Katie passed away just six weeks before her husband of 67 years, Gordon was by her side, holding her hand, vowing that it would not be long until they were together again.

Gordon shall be sorely missed. He is survived by his loving son, Gordon Everett Reynolds III, his nephews Jay Reynolds and Jack Grant, his nieces Anita Padgett, Belle Everette, and Cindy Larendeau, as well as grand-nieces and nephews.

In lieu of flowers, please send donations to the First Presbyterian Church of Hendersonville, The Conservation Fund, or the NINDS Division of Intramural Research.

We sincerely offer our condolences to Gordon’s family. He was such a endearing person that we throughly enjoyed when we would spend time on the tennis courts together.

What a priviledge to have known Mr. Reynolds! During my 25-year career at the local YMCA, I came to know him as one of the most outstanding volunteers who did not shy away from work in order to complete a goal. It was a joy to have him around — he boosted other volunteers and staff to reach for goals that seemed impossible. His honesty, integrity, and hardworking abilities made a life-long impression on me and many others, I am sure. My condolences to the family in this sad time, but remember and embrace the wonderful legacy he left to you. Sincerely, Carla

Gordon will be sorely missed.

I thoroughly enjoyed playing tennis with Gordon. He was such a gentleman on the court and everywhere else. I lived in Dawson, Ga–18 miles from Albany — for 8 years. Gordon and I enjoyed reminiscing about Albany and that area. My deepest sympathy in both his and Kate’s death.

Gordon taught me tennis and gave me encouragement. He stood by me while I was scheduler for the Henderson County Mens Tennis Assoc. I will miss you Gordon. May God rest your soul. See you on that big court in the sky