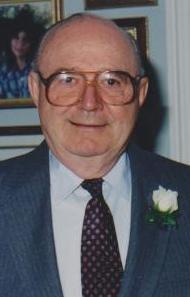 John Frazier Kenney of Hendersonville, retired systems engineer for the FAA died peacefully on Sunday, November 4, at Pardee Hospital after years of declining health. He was the husband of the late Vivien (Hulsey) Kenney with whom he shared 29 years of marriage. He was born in Malden, MA on June 14, 1926, son of the late Evangeline (Abbott) Kenney and John Kenney. He was raised outside of Boston and, after graduating from Stoneham High School, proudly served in the Army Air Corps during WW II in the South Pacific as a B17 Gunner. He was honorable discharged and went to work at the Boston Naval Shipyard before making a career with the Federal Aviation Administration in Nashua, NH as a systems engineer. After retiring, John and Vivien relocated and made their home in Hendersonville.

During his time in New Hampshire, John loved to spend time at Lake Winnipesaukee. John is remembered by family and friends as having a lively sense of humor and would often stop you from heading somewhere with one more quick joke. He had a variety of interests and hobbies, including square-dancing, coin and baseball card collecting and playing the guitar. He was a learned man who loved music and could be heard reciting prose during long drives with the family. One of his many passions was as a ham radio operator and he was proud to have been able to log contacts with every country.

A memorial service will be held 2:00 PM Saturday, November 10, in the chapel of Forest Lawn Funeral Home. Burial will follow in Forest Lawn Memorial Park with mililtary honors rendered by Hubert M. Smith American Legion Post #77, Hedrick-Rhodes VFW Post #5206 and Chapter 14 of the DAV. The family will receive friends for one hour prior to the service at the funeral home. In lieu of flowers please consider a donation to the Wounded Warrior Project, P.O. Box 758517, Topeka, Kansas 66675.

The Board and Staff of the Community Foundation of Henderson County wish to express deepest sympathy to the family and friends of John Kenney on the sad occasion of his recent passing.