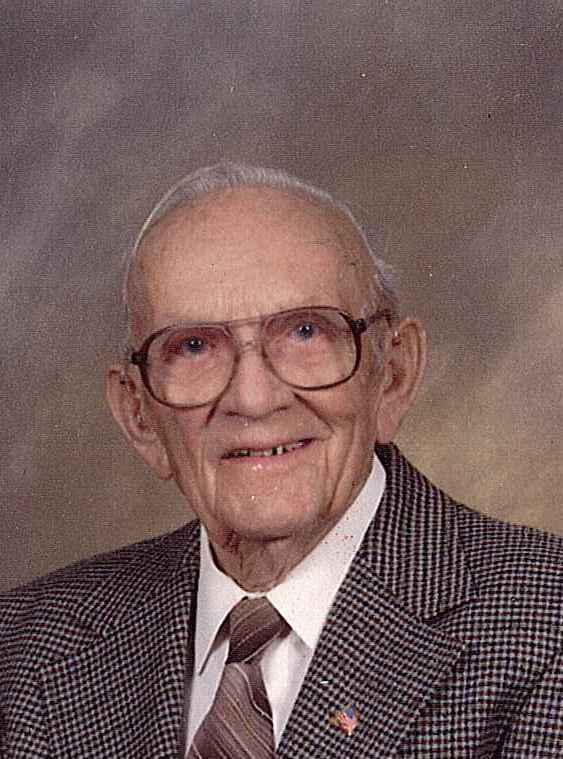 Joseph D. Welch, 92, of Hendersonville, moved to his home in Heaven with his Lord and Savior Thursday, March 17, 2011, from the Elizabeth House in Flat Rock, following an extended period of decline. He was born in the Burningtown Community of Macon County, Franklin, NC on June 2, 1918, to the late Edward (Ed) Alonzo and Myrtle Mae Brendle Welch. In addition to his parents, Ed and Myrtle Welch, and his wife Leona, he was preceded in death by his sister, Gladys Harry; brothers-in-law, Charles Southard and Tommy Angel ,III, and nephew, Tommy Angel, IV.

J.D. volunteered for the army in Jan 1940 at Ft. Benning, GA. Basic training gave him the opportunity to travel from the Gulf Coast of TX, up the Eastern Seaboard to VT. When Pearl Harbor was bombed on Sunday, Dec. 7, 1941, he had just arrived home the previous Thursday on a ten-day pass. He returned to his unit, the 1st Div./Batt. B/32nd Field Artillery and 371st Field Artillery. The 1st Div. and attached units left NY Harbor on Aug. 2, 1942 on the ìQueen Maryî and arrived in Scotland at the Clyde River Docks at Gourwick, Scotland, Aug. 7. They went directly to Tidworth Barracks, England. The battles and campaigns he saw action in were: Algeria; ìOperation Torchî, the invasion of North Africa at Morocco in Nov. 1942-where the enemy was German Gen. Rommelís unit, along with Italian and French foreign legion troops; the Kasserine Pass battle in Feb. 1943; Tunisia; and ìOperation Huskyî on the island of Sicily in July 1943, commanded by Gen. Omar Bradley from Jul-Aug 1943. The 1st Div. traveled 14 days to get from Algiers to the British Isles. He went into France in the invasion of Normandy on Omaha Beach in June 1944; N. France; Rhineland; Ardennes; the Battle of the Bulge, and Central Europe. At the end of the war, he sailed from Marville, France on the ìJohn Ericksonî, on Aug. 31, 1945, and arrived in the US, Sept. 12, 1945. While serving in the European Theater, he achieved the rank of Staff Sergeant in charge of ammunition, four machine guns, and 14-6 men. They used 30/30 carbines, 105 Housers, and other smaller guns and pistols. J.D. received the Eamet Campaign Medal with eight bronze service stars and one bronze service arrowhead, the good conduct medal, American defense service medal, and distinguished unit badge. An Honorable Discharge was granted Sept.18,1945 at Ft. Bragg, NC.

Upon returning to NC, he married Leona, his dear wife of 47 years. What a wonderful reunion they are having in Heaven now. They resided in Winston-Salem, where he became a carpenterís apprentice and used those skills throughout his lifetime. He later became a route man for Zinzendorf Cleaners and Laundry, being honored for his service, ability to get along with others, and his always smiling disposition. He was on the job early and worked late, forever attempting to give the customer his best. J.D. loved meeting and talking with the public on his daily outings and made many dear friends. For 26 years, he worked six days a week, taking only the allotted July 4th week each year as vacation. What a testament to a work ethic that seems to have fallen by the wayside! When Old Salem purchased the Zinzendorf property and the laundry closed, J.D. couldnít stay idle long. He worked for Sartinís Laundry and Dry Cleaning for five years. He was a dedicated family man who loved God and his family and provided well for them.

He was saved and baptized at Waughtown Baptist Church, where he grew in his Christian walk and served as an usher. Upon moving to Hendersonville, he became a member of Refuge Baptist and cherished the friends made there. He loved reading his Bible each morning before getting his day started.

Heartfelt thanks go to all those friends who opened their hearts to him when he first came to Hendersonville, and a special thanks to Sue Marshall, Brenda Cool, Dr. Ron Moffitt and his staff, Rene Richardson and the staff and volunteers with Four Seasons Compassion for Life. It is with great appreciation that we also thank Jeff Miller, Mike Murdock, and all those on the Honor Air committee for their tireless efforts in putting together the Honor Air flights. J.D. had never been on a plane, never been to Washington, and didnít believe heíd be able to make the trip, but because of the thoughtful planning of all those involved, this was one trip he never forgot.

A joyful celebration of J.D.ís life will be at 2:00pm, Monday, Mar. 21, 2011, in the Forest Lawn Funeral Home Chapel, with Rev. Glenn His officiating. The family will receive friends 12:30-2:00 p.m. in the chapel prior to the service. Burial will follow at Forest Lawn Memorial Park with Military rites conducted by Hubert M. Smith American Legion Post #77, Hedrick-Rhodes VFW Post #5206 and Chapter 14 of the DAV. Memorials may be made to First Baptist Church, 312 5th Ave. W, Hendersonville, NC or to Four Seasons Compassion for Life, 571 S. Allen Road, Flat Rock, NC 28731.

We are so sorry to read of Mr. Welch’s death.

We are thinking of you and praying for you at this time.

You are in our thoughts and prayers. It is never easy to lose a parent. We will miss Mr. Welch’s sweet smile, but what a blessed reunion he is having in Heaven with his wife and loved ones that have gone on before him. May God give you comfort in knowing that you will all be united again someday. God bless you all.

Norma and family, My heart goes out to you in the Homegoing of your Dad. I know where you are at this time and I know that God’s grace will see you thru the days and weeks ahead. Rejoice in knowing he is with the Lord and what a wonderful time of rejoicing he is having there in Heaven! With my love, thoughts, prayers and deepest sympathy … Alton