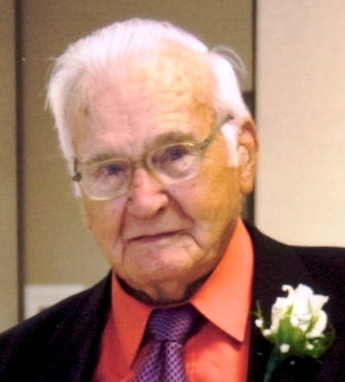 Born June 25, 1918, he was a lifelong resident of Henderson County and a son of the late Mitchell Capps, Sr. and Lola Pace Capps. In addition to his parents, he was preceded in death by his loving wife of 73 years, Catherine McCall, his sister Evelyn Pace and brothers Leo, Bill, Torrence, Ben and Mitchell Capps, Jr.

Mr. Capps, known by all as ìBuck,î was employed by the Farmers Federation and Cranston Print Works early in his career. He was later employed by General Electric, from where he retired in 1981. He was a part-time farmer all his life, and upon retirement continued growing vegetables. He sold those vegetables at the Hendersonville Curb Market, of which he and his wife were active members of for many years.

A funeral service will be held at 11 am on Monday, June 16, 2014, in the chapel of Forest Lawn Funeral Home. Rev. Tony Hall and Rev. Bob Taylor will officiate the service. Burial will follow in Forest Lawn Memorial Park. The family will receive friends from 10 am to 11 am prior to the service in the chapel.

Memorials may be made to Ebenezer Baptist Church at 2557 Chimney Rock Road Hendersonville, N.C. 28731, Gideonís International, or the charity of your choice.

We are sorry to hear of Mr Capps’s passing. He was a wonderful Christian Man. We loved him. He is now with his beloved wife. May God comfort you.