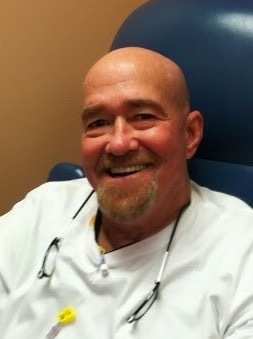 Rickey Lee Grasty, 60, of Hendersonville, died Sunday, June 28, 2015 at his home after a lengthy battle with cancer. He was the son of the late Willis Lee ìTobyî Grasty, and Agnes Stepp Grasty of Hendersonville. He was also preceded in death by his sister, Lynn Grasty Case.

He was a longtime resident of Henderson County, graduated from East Henderson High School in 1973, and attended Chowan Jr. College, and served in the U.S. Navy. He worked at Byron Seed Co. as warehouse manager for many years, and later owned his own business, Grastyís Landscaping. He most recently worked at Sylvania Lighting Co. as a Lighting Technician.

A Celebration of Life will be at 3:00pm Thursday. Gethsemane Baptist Church. Revs. Dwayne Durham and Danny Pridmore will officiate. A visitation will be from 1:00-3:00pm prior to the service. At other times the family will be at Rickís home. In lieu of flowers, donations may be made to Four Seasons Compassion for Life, 571 S. Allen Road, Flat Rock, NC 28731.

I am deeply sorry for your loss. It was a pleasure to have met all of you and I will continue to pray for your family.

Our thoughts and prayers are with you Agnes and Kim and your family from ours, Bunny, Shot, Gail and John.

Toby & Family, So sorry to hear about Rickey. We had allot of good times growing up with youth football and later being involved with coaching our sons. Our thoughts and prayers are with you all.

We want to extend our deepest sympathy to each of you. You all are in our thoughts and prayers. May God grant you comfort, peace and strength for each day. We will always have many wonderful memories of Ricky.

Dear Agnes and the rest of Ricky’s family, our hearts and prayers go out for you in your great loss.Praying for the Lord to give you continued strength during this time of grief. We love you, David and Jo Ann

Sending Prays to you all. May God wrap his arm around you all.

Agnes and family, We are so sorry to hear about the loss of Rickey. He is not suffering anymore. He is in heaven with my father Agnes. They are rejoicing in song. We will see them real soon. Our thoughts and prayers are with all you at this time. May God Bless all of you at this time. Love, Mary & Brenda

You are and will be greatly missed. Thank you for renewing our friendship from the 70s.. I gotten to know four wonderful people your precious children Tonya, Sunshine,,Bo and Toby. I have made friends with your beloved Connie. You both have helped me to stay close to Christ. My deepest and heart felt condolences, prayers, thoughts and love go out to your precious Mom and your precious sister Kim. Your pain is over my friend no more fighting, you can rest peacefully in the arms of God. We your friends and family will miss you more than words can say but look forward to the day we are with you aga. You and Connie have became my inspirations. I think I will miss your smile and laughter the most but your faith and courage were so uplifting. You are now in the presence of God, been reunited with your Daddy and beloved sister Lynn. You left this world a better place just by being in it.

The entire Moody family is saddened by the loss of one we considered our brother, we loved him deeply and will miss him greatly.Our thoughts and prayers are with you Miss Agnes and Kim.

Sorry for your loss. Enjoyed going to school with him. Always with a smile on his face.