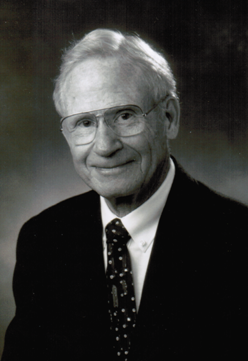 Robert Dean ìBobî Eklund, 83, of Hendersonville, passed away Saturday, September 17, 2011, at Elizabeth House after a period of declining health. A native of St. Paul, MN, he lived in Minneapolis, Indianapolis, Philadelphia, and Chicago before moving to Henderson County in the 1970ís. He was a son of the late Clarence and Ethel Eklund, and was also preceded in death by his eldest daughter, Dianne Lynn Eklund, who died in 1984. He received a Bachelor of Arts degree in Political Science from the University of Minnesota. He was employed with Olin Corporation for thirty years, and Flexel Corporation as sales manager for domestic and international markets for four years. He was drafted out of the University of Minnesota in 1946, and served as an Army Cryptographer. He was a member of the Lutheran Church of the Nativity in Arden.

Bob was very active in his community. After retiring, he did fundraising for the Hendersonville Symphony, the YMCA, and Pardee Hospital. He mentored an elementary school student through the local Boys Club. In 2006 Bob and Doris Eklund received the Pardee Hospital Foundationís ìHealthcare Philanthropist of the Yearî award. In 2010 Bob and Doris received the Richard C. and Vina L. Sauer Charitable Leadership Award from the Community Foundation of Henderson County. In 1994, he was elected County Commissioner and served for four years, two of them as Chairman. He served on the boards of Smart Start, the United Way, Pardee Hospital, Council on Aging, the YMCA, and Trend Mental Health Services. He belonged to the Daybreak Lions Club (past president), the University Club, the Hendersonville Country Club, the American-Scandinavian Foundation and the University of North Carolina Rams Club. Bob was an avid sports fan who enjoyed watching sports, (especially UNC), and also participating in golf, swimming, walking and table tennis.

Doris, sorry to hear about Bob. The Loss of a husband is always hard and our thoughts are with you. We knows that he lives on in your heart and you have many fond memories from over the years.Our sympathies are with you.

Doris and Family – you are in our thoughts and prayers. Bob was a great man and we feel privileged to have known him!

I will miss Bob and his ever ready smile and laugh. Doris, we are thinking of you during this time of loss.

Doris, Our thoughts and prayers are with you and your family.

We are sharing in your sadness today. You have been in our thoughts a lot for several weeks now knowing your husband was not well.We to are saddened for your loss.

I’m so sorry to hear of the passing of your beloved Bob. Losing your lifes partner isn’t easy.. just remember..God is carry you forward… Love and blessings

Our thoughts & prayers are with you during this difficult time.

Peace Be With You

Our thoughts and prayers are with you at this time. We certainly are going to miss Bob. Blayne & Barbara

Doris, I am so sorry for your loss. I know you had a wonderful life. Sincerely, Mitzie Robinette

your strength and comfort.