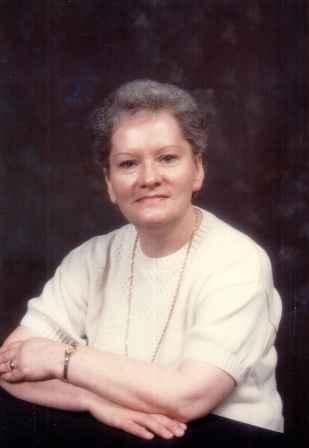 Santa Vada Hargus, 77, of Hendersonville went home to be with the Lord on Saturday, February 18, 2012 at Elizabeth House, after an extended illness.

A life-long resident of Henderson County, she was a daughter of the late Johnny and Sants Hipps.

In addition to her parents, she was preceded in death by her husband, William M. Bill, Jr and her canine friend ìRosieî.

She retired from General Electric in 1993 and was a member of Crossroads Baptist Church. She was a gentle, loving mother, grandmother and friend and will be greatly missed by all who knew her.

A graveside service will be at 2:00 pm Tuesday at Forest Lawn Memorial Park. Reverend Mikell Bennett will officiate. The family will receive friends one hour prior to the service in the chapel at Forest Lawn Funeral Home.

I knew Vada for a short time but in that short time I knew her, I felt very very blessed. She warmed my heart so much. I wish her family strength to make it through these tough times. May peace be with all of you.

Lynn, Kenny & Greg, I am so sorry for your loss. Our thoughts and Prayers will be with you all during this difficult time.

KENNY & GREG; SO SORRY TO HEAR ABOUT YOUR MOM. SHE WAS A VERY NICE LADY. WILL KEEP YOU IN OUR PRAYERS.

We would like to send our sincerest condolences to the Hargus family. In Life, all individuals will eventually pass, but it is never easy for the family members when this occurs. The pain is felt more so when it is ones Mother or Grand-mother. May the pain ease with time and the memories grow fonder.

Sorry for loss of your Mom, I remember many, many, years ago when she work at GE, was one the sweetest people to be around with out there, , she was always so nice and good to all, Lynn, you and your family are in our prayers, Lynn & Jackie Pace

Dear Lynn, we are so sorry to hear of your mothers passing. I saw her at Brain Center in the fall. You are in our prayers. Virginia and Larry

I’ll be praying for you Kenny and Greg and your families. God bless you at this difficult time.