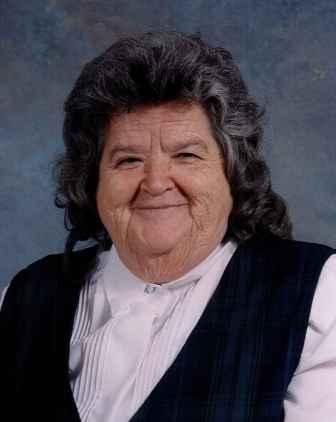 Tempie Gordon Travers, 74, of Hendersonville passed away Sunday December 23, 2012 at her home following an extended illness. A native and lifelong resident of Henderson County, she was a daughter of the late Eddie Lee and Helen Lindsey Gordon. She was a member of Victory Tabernacle in East Flat Rock.

A funeral will be at 2:00 pm Friday at Victory Tabernacle. Revs. Norman Bayne and Harold McKinnish will officiate. Burial will follow at Forest Lawn Memorial Park. The family will receive friends from 6 to 8 pm Thursday at Forest Lawn Funeral Home and at other times will be at the residence.

To the Travers family,

I knew Tempie as she had been a patient of mine 3 different times through Pardee Home Care. She was a sweet, special lady. I am so very sorry for your loss. You are in my thoughts and prayers at this difficult time.

oh David and the rest of the Travers family, I am so sorry to hear of your mom’s death. At least you know that she is in a better place with Jesus now. No more pain no more struggle of this life will she ever know again. my heart is with the whole family. Love to all, DeAdra

May God bless and comfort you.

Tom and Family, You are in our thoughts and prayers in

the passing of your loved one. Tempie was a dear friend to all that knew her.

May God comfort and bless you.

My thoughts and prayers are with you Sabrina, and your family during this trying time, especially through the holiday season! May God bless and comfort you!

We have the family in prayer and she was always smileing and pleasent to talk to.Her mother sure did take care of my Dad.

We will greatly miss Tempie but she is in a better place we are praying for you.

So sorry for your loss. Your family is in my thoughts and prayers.

My prayers are with you all and know that God will comfortable and support you.

Our prayers and support are with you during this hard time. Jan & Reg